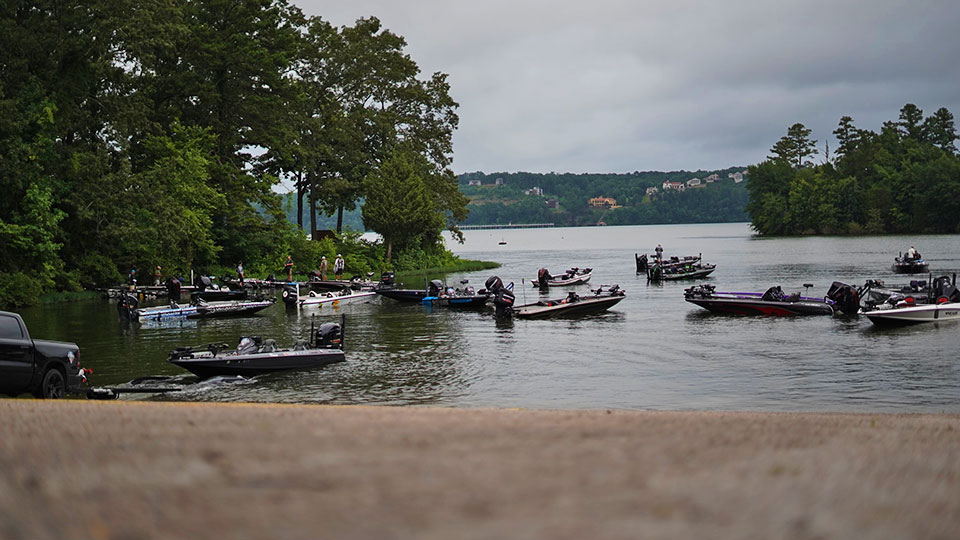 It’s go time for the final day action on Pickwick Lake. Counce, Tennessee’s own Brandon Perkins is getting it done so far after two days and heads into the final day with a 7-pounds, 6-ounce lead over Kentucky angler Shawn Murphy. Perkins utilized a run and gun tactic on day one which required an entire tank of gas. Opting to avoid camping on spots, Perkins was able to sample as many schools of Pickwick bass as possible, which helped him dial in which schools he could get to bite, and which ones had quality bass.

“Because I didn’t fish in practice, I really wasn’t sure which schools were going to work for me. There are fish everywhere, but not all of them you can get to fire. Day one I was able to figure them out a little bit and also see where everyone was fishing.”

Day two, Perkins slowed down in a big way, burning only 9 to 10-gallons of fuel. While still moving around, Perkins worked spots and key areas more thoroughly and managed to up his day one weight slightly with one ounce shy of a 20-pound limit.

Shawn Murphy is another angler who has been consistent and moved around the Pickwick Ledges. Sitting in the second-place spot with solid bags of 15-pounds, 10-pounces and 16-pounds, 1-ounce, Murphy has spent some time each day looking for new fish.

“I am going to my key areas to start the final day, and one of them has not had much pressured. I have been rotating ledges between 12 and 2-foot, and I do have some keys to getting the fish to trigger.”

Opting not to give up those keys yet, Murphy has been working baits to trigger a reaction bite, and noted he will slow down when the fish call for it.

The rest of the top 5 anglers are a good mix of consistency and dropping the hammer. 3rd place angler Marc Schilling is riding a 10-pound bag and 20-pound bag this week and anything is possible when good anglers get around quality fish. Joel Willert has also been consistent with 14.5 and 15-pound, 9-ounce bags. Willert is also getting bites around other anglers.

Read about the top five anglers and their patterns, here!

David Gaston is keeping things going in the Progressive AOY Race with yet another top five after two days. With two solid bags, Gaston has himself in position to make up solid ground on the AOY leaders.

It’s not been mentioned much, but Perkins also quietly has put together a solid season, starting 41 points behind leader Nick Prvonozac, Perkins is going to try and win this tournament and let everything else fall where it may be.

“Man, those guys are so good. I could win this event and hardly gain any ground, so I am going to try and win and let the rest fall into place. I knew going into the season, if I fished my style and cut a check at every event, I would have a shot. So far, I am just fishing and have done okay.”

Sitting in 5th place to begin the week, Perkins has himself sitting ahead of the top four guys, but solid finishes by everyone will keep the race close, with some swapping of places.

Today’s weather forecast is 50% chance of rain, winds 5 to 10 MPH, and chance of thunderstorms and variable clouds all day. Local angler Cole Walker is an accomplished Pickwick angler and says this weather might shake up the leaderboard with the entire field fishing the final day.

“With the weather coming on Saturday, you’re going to see the shallow bite and the grass bite play a lot more than the first two days. Depending on who was consistent the first two, someone who has been fishing up there could bust them big that final day with the change in forecast.”

The rain and clouds help the shallow bite according to Walker, but David Gaston is banking on the same thing for his final day. Fishing offshore grass more so than ledges, Gaston caught big fish in practice under the same conditions and say his weights drop the first two days of competition.

“I have seen way less quality so far than practice; I have caught less fish and less quality fish. All around the country, overcast and rain is good for that offshore grass and that’s where I am fishing. I am hoping to catch them good tomorrow.

Walked noted earlier in the week, depending on who figure out how to make the ledge bite work, and how much of a lead someone may have, the AOY guys who are struggling shallow could make a huge come back on the final day.

“Those guys may not end up winning shallow if someone catches them good two days in a row offshore on the ledges, but there should be some good bags caught shallow in the grass – someone will make a comeback for sure. Carson and Prvonozac are both fishing shallow, if they can hang around, they should catch them good on that final day”

Tune in daily July 15th through the 17th to thenationalprofessionalfishingleague.com to watch daily LIVE Coverage, the LIVE Leaderboard, LIVE Blog, and daily on the water photo galleries of the anglers on the Pickwick Lake.