Day One Begins at Grand Lake O’ the Cherokees. 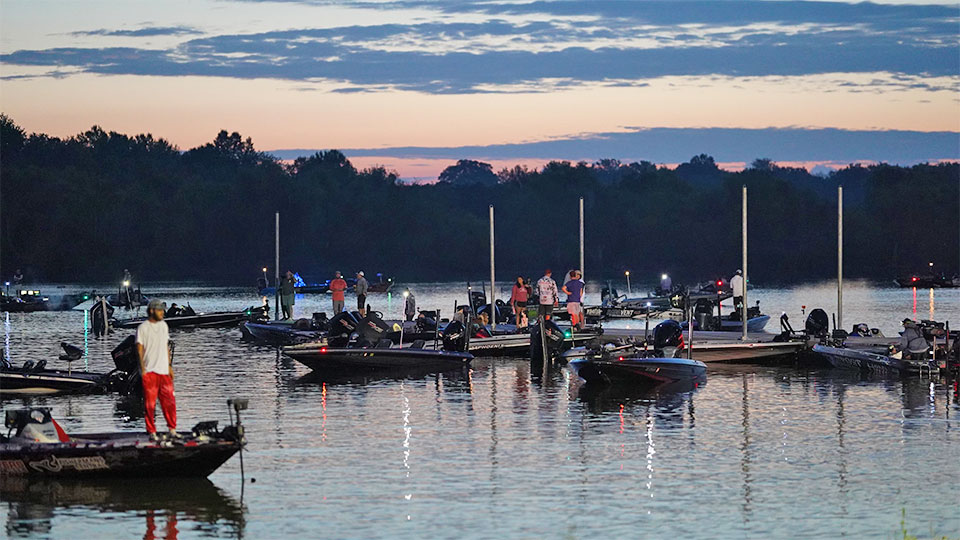 GROVE, OK – With temperatures at launch in the mid 60’s this morning, anglers will be facing a complete change in weather. Practice conditions were hot with bluebird skies and the tournament is projected to be wet for at least portions of every day with overcast skies. With the weather shifting, anglers look to figure out the changes and get to work catching fish.

Florida angler Keith Carson is used to hot sunny conditions, but on Grand Lake O’ the Cherokees, those conditions make for tough fishing, especially coming after a cooler trend brough fall like conditions prior to the practice period.

“It was a difficult practice for me, clear blue skies and windy, both which are not great for fishing sallow. I don’t know what to expect this week with the weather change, but I can expect forecasted rain and cloud all three days, which is a major shift.”

Another angler who is waiting to see how the weather change affects the fishing is Texas angler Mike Yoder. Yoder sits in the last Championship spot and like Carson, a tough practice has him waiting to see before making any predictions.

“I found two patterns and I am going to stick with them. It’s definitely going to change some, and ill adapt as I go. As far as the weights this week, I just don’t know until I get out and they bite or not. I think the cut line will vary by a pound, depending if the weather helps or hurts the bite.”

Like the others, Mike Comeau believes he found something “decent” but is worried he got sucked into a pattern that may be on its way out. The Vermont angler located several pods of bait with some fish around, and opted to not sample the offshore bite at all during practice. Looking back, he might regret that decision.

“If you go into the right pockets, there is so much bait, the water looks brown, you get over there, its baitfish. It’s like you could get out of the boat and walk across the top of them it’s so thick. Just because there is bait, doesn’t mean it all has fish around. The weather either had them not biting, or they just have so much food it’s hard to trick them. Or, they just are not there in general. I found some other hard targets that are holding fish but I have no idea what I am on because if I got a bite, I left.”

William Fletcher also had a semi-tough practice period and is playing the waiting game to see what he is around for fish. Fletcher is sitting a couple places inside the Championship cut line but knows he needs a good finish this week to stay safe.

“I have been working to get on something, it’s not been great, I can catch some, but I don’t know exactly what I have because I have left after getting bit. Hopefully I have more than what I realize. As far as the championship, I will have to play my game plan by ear, I might try to catch all I can to get a solid weight, or I could lay off and try to save some fish. It’s so tough to gauge because you can catch a few good ones quick, or take 5-hours to catch two fish, you never know.”

The Progressive Angler of the Year Race will come to a close this week as leader Brandon Perkins looks to close the deal on the inaugural NPFL Season AOY Title. Perkins will begin the event 4 points ahead of Keither Carson, who holds an 8-point margin over 2-time winner John Soukup. Right behind Soukup, Marc Schilling sits in 4th with 1193 points, 3 behind Soukup, and 8 ahead of 5th place Bryant Smith.

Read more about the AOY Race leading up to Grand Lake, here!

Tune in daily September 30th through October 2nd to thenationalprofessionalfishingleague.com to watch daily LIVE Coverage, the LIVE Leaderboard, LIVE Blog, and daily on the water photo galleries of the anglers on Grand Lake.