It's time to get to work in Bay City, MI and the NPFL Pros are punched in. 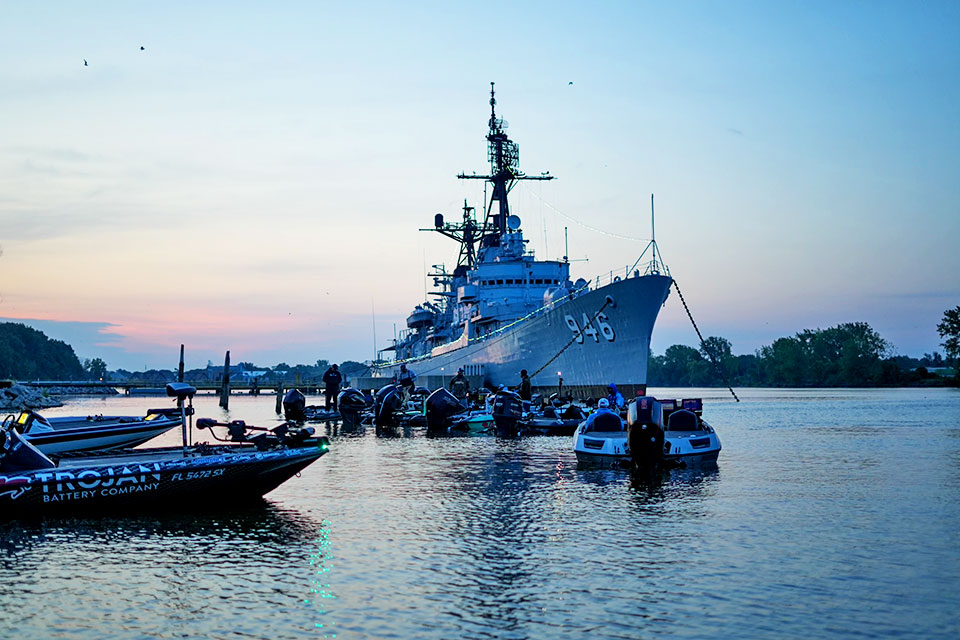 Bay City, MI. – After smallmouth dominated on day one, anglers will be facing changing conditions for day two. While many closely monitored the weather forecast and decided to target smallmouth in preparation for big waves on Thursday, a South blowing 10 to 15-knots, becoming 15 to 20-knots and gusting to 25-knots greets the NPFL field on day two. Will the largemouth anglers even the playing field on day two with the ability to avoid the open waters of Saginaw Bay, or will those at the top brave the winds and land on awaiting smallmouth?

Anglers faced some windy conditions in practice and reportedly caught bigger, quality smallmouth. Those who dare who make the 30 to 45-mile runs could be rewarded with fast action and bigger quality bass. For those opting to stay closer to target largemouth, can the weights remain steady or increase enough to overtake some smallmouth?

These are all questions that will be answered tomorrow on Live Coverage starting @ 8 a.m. ET.

Leader Tim Wilson is one angler who took advantage of calm conditions and put three fish over 5-pounds in the boat on day one while filling out a solid limit. His plans for day two are slightly different as he plans to target largemouth bass and forgo the run across Saginaw Bay.

2nd place angler Gary Adkins is planning to make the long run. What took 25-minutes on day one is projected to take over an hour on day two. The Great Lakes specialist knows if he can get to his areas on day two, the bigger quality that he located in practice may indeed be waiting.

3rd place Trent Palmer is also planning to forgo his smallmouth bite depending on the actual conditions in the morning. If he is able to spend a couple hours and land a couple key bites, he is content fishing for largemouth to salvage the day.

4th place Patrick Walters, winner of the NPFL Watts Bar, is planning on making the run, taking his time and settling into the areas he has confidence in. Not afraid to grind it out, Walters will jump between shallow and deeper fish on his larger “general area.”

5th place Sam Whitmire targeted largemouth on day one and has no plans to change his approach. He expects more company in his areas due to higher winds but is confident if he has some water to himself that he can catch another quality limit weeding through over 70 bass on day one.

Tune in to thenationalprofessionalfishingleague.com to watch daily action from Saginaw Bay, with Live Coverage beginning on Thursday.

Follow along and watch the daily LIVE Leaderboard, LIVE Blog, and on the water photo galleries and blogs of the anglers on Saginaw Bay!

See the Results from Day One, here!