The wait is over. Practice is over. This morning, we launch The National Professional Fishing League. 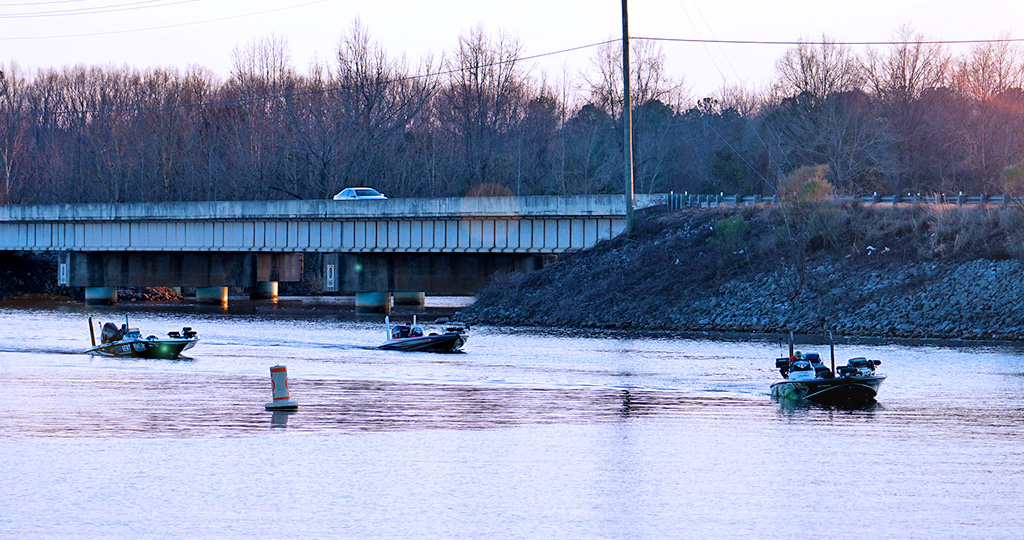 The common question this week after talking with the anglers during the practice period is, will it warm enough, or not? Several reports of water in the low to mid 60’s, some areas high 50’s, while the main lake is colder. Several guys are hoping that Eufaula will fire after an 80-degree “off day” Wednesday. The low temperature overnight was in the upper 40’s which should help the bite. Recent Bassmaster Opens Champion (December 2020 – Lay Lake), Keith Carson, is not planning on anything just yet however.

“I think the fish are coming, they want to come, but they are not quite there yet. It hasn’t been the high temperatures that has hurt us, it’s been the lows. I have seen a few male’s shallow but females are nowhere to be found. The tournament weather is supposed to play into what I am doing but it really is a timing deal.”

The Debary, Florida angler believes it is going to come down to guys making decisions on the fly as the weather changing, and an off day in between, has everyone guessing. Carson knows where they want to be, and plans on fishing in those areas in hopes of surviving day 1.

“If I can catch a decent bag, get 5 keeper fish, I can survive. I think I can do well later in the event but you can’t get too far out after the first day as is will be hard to make up weight under these conditions.”

Matt Looney of Colombia, Missouri echoed Carson and says he is having no problem catching numbers, but the big fish are hard to come by.

“I have had no problem catching some fish, but the cold start to the day has kept the females off shore. The water is cleaner today (Wednesday) than it was Sunday but I am not playing into the spawn being a big factor just yet.”

“I have been looking for areas where they should be waiting for the water to get right. If it has brush, it’s even better. I have seen some males shallow like everyone else but the females are not up.”

Scott Siller, Gillette, WY, is making his first trip to Lake Eufaula this week and has enjoyed catching decent numbers, but only has a few bigger fish to go with it. Like Carson, Siller is not making any solid plans just yet and plans to spend part of his first day practicing.”

“I found an area that I can catch a limit fairly quick. I don’t know that I can catch any big fish from the area, but I should be able to get a decent start. I caught a few bigger fish early in practice doing something different but nothing since then.

Although the weather has been holding the spawn back, there has been some activity in areas of the lake where the water has reached the higher 60’s. Siller dropped part of his day Tuesday and got on the bank to see what he could see.

“I am going to see how the starting spot turns out but I may go look for some bed fish and spend some time shallow if I can get off to a decent start. Word got out Tuesday and a lot of guys started looking. I didn’t find anything other than a lot of males, but the weather is going to get right so you never know when they get up there.