It's tight at the top heading into Championship Saturday. 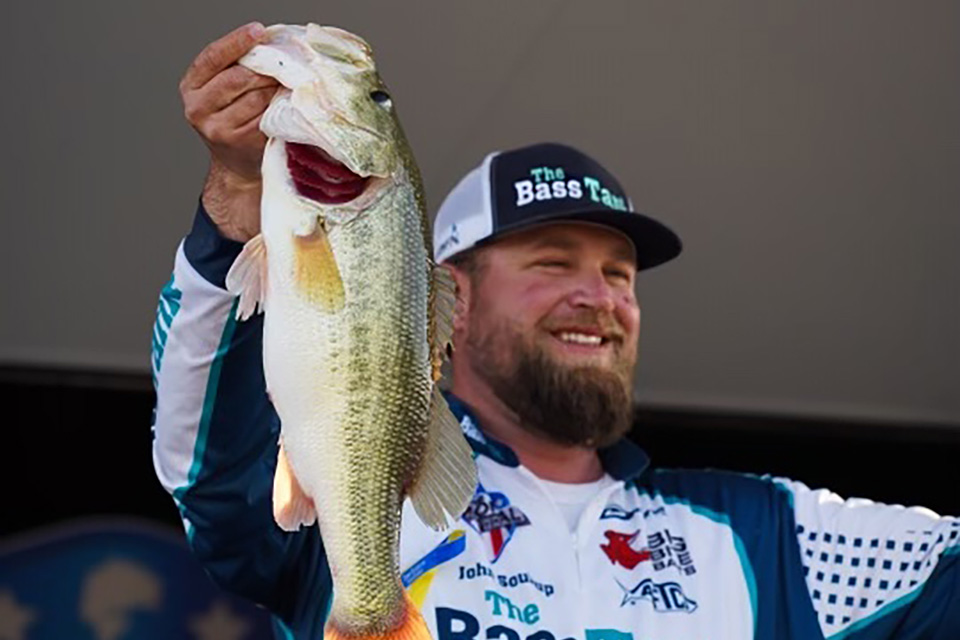 EUFAULA, Alabama – John Soukup maintains his lead on Lake Eufaula with a 5 fish limit of 20-pounds, 2-ounces. His total weight of 40-pounds, 14-ounces anchored by a 6-pound, 4-ounce lunker gives him a slim lead over the 2nd place angler.

As seen on live, Soukup picked up where he left off yesterday and probed around on a 100-yard stretch to catch most of his weight today.

The Sapulpa, OK pro noted that most anywhere he parks, the big fish are there, but the key is making them bite. In between catching 15 to 20 bass on day 2, a few long lulls in the action has the leader a little worried.

“I am going to go back to where I got them today and hope I can get them to go. The jerkbait has been the key for me but I did pick up that 6-pounder on a spinning rod today. I need to hunker down and catch a limit and then just move around to find ones that want to bite. I can get in and out of areas in that Xpress boat quietly and I have to make long casts.”

On live, viewers saw Soukup hook up with a small keeper bass as he noticed a bigger fish following along. One of two doubles today on the Spro jerkbait, Soukup says that was one of the coolest things.

“I was fighting that small one to the boat and dropped my rod to let the fish swim and that big one smashed it. Tomorrow I just need to settle in and fish my areas. The obvious spots that look good seem to be harder to get bit but I have a couple little areas that should have some fish left.”

Chance Woodward was the star of live coverage today and cranked his way into the 2nd spot less than 2-pounds behind the leader. Woodward weeded through 50 plus bass today for the biggest bag of the event. His 23-pounds, 8-ounces has his total weight at 39-pounds even going into the final day.

“I am fishing where a main creek dumps into the river but I have a few sweet spots where they are loaded up. The wash out from the creek creates these hard bottom spots and the school of fish I was on was huge.”

Making a precise cast has been key to casting these Eufaula bass, but the Texas pro spent some time keeping people guessing. With multiple boats in the area, people took notice of his non-stop action.

“I moved all around that area today scouting a bit and keeping people wondering. I threw that Lew’s 7’11” David Fritts Signature Crankbait rod all day and they were smashing the Strike King 5XD.”

Unsure about how his fish will react to the thrashing he gave them today, Woodard has a few cards in his back pocket, just in case.

“I pushed my way back into a pocket this afternoon where I saw some males in practice and ended up caching a good fish on a buzzbait. That gave me an extra half-pound. I located two other areas that seem to set up like my main area and I think I can catch them there if needed.”

The goal is to get back to work early on the final day and Woodard isn’t worried about catching fish, but is hopeful a few bigger fish move back into the area.

“I did some math this afternoon. I think I have caught over 70 fish on that one area – it’s unreal. If that spot dries up, I’ll make a move and I am confident I can run into some fish somewhere. I should be able to get a limit, and then I’ll get rolling.”

Nick Prvonozac topped his 16-pounds, 10-ounces on day with a 5 fish stringer of 18-pounds, 2-ounces. The Warren, Ohio pro stuck to his game plan but after all morning without a bite, had to change it up.

“I went through an area in 4 to 5-foot and didn’t get a bite. The water is dropping so much and I got to a stretch and ended up getting them on a Booyah Pad Crasher.

Tomorrow, more of the same. Prvonozac will return to his area and keep fishing around.

“I am fishing dirt shallow and I think the falling water has the fish retreating and they are all along the grass edges.

David Gaston relied on his Day 2 weight of 19-pounds, 9-ounce to slip into the top 5 with a total weight of 33-pounds, 11-ounces. The Sylacauga, Alabama pro started in an area where he had a good bite in practice and landed a 4-pounder yesterday.

“I had this little spot on the main lake where the boat wakes kept it stirred up. The falling water made is tough and I only had 3 fish around 11 AM and knew I had to make a move.”

Setting for 9 to 10-pounds was not in the cards and a gamble paid off big time for Gaston. After searching around for an area that was not as affected by the falling water, he settled in and went to work in a big way. A few quick bites and a 5-pounder to finish his limit was all it took.

“I caught that big one, culled a few times for ounces, and boom, a 4-pounder. I wanted one more good bite to finish my bag off. I ended up losing another good one around 4-pounds and not 3 minutes later that big one bite.”

A 6-pounder to anchor his day and move him to the top 5 and Gaston now has to figure out what to do on the final day to keep his momentum pointed upward.

“I will end up fishing a lot of new water tomorrow looking for big bites. The biggest thing is getting a limit, catching those keepers, and getting bigger ones mixed in. I am going to keep that swimjig in my hands and rotate around shallow and a little deeper.”

Louis Fernandes followed up his day 1 weight with 18-pounds, 2-ounces for a two-day total of 30-pounds, 10-ounces. Going into the final day, Fernandas knows he is doing the right thing, and needs to connect with some of the big ones he saw in practice.

“On day 1, I should have had a mega bag. I went into one of my better pockets and there was another guy who came in behind me. I went left, he went right. Soon after he dumped a 7 and a 9-pounder and I would have been around those fish.”

The Santa Marie, California pro is fishing shallower than anyone in the field and pushing himself into pockets to look for fresh fish.

“I am covering all new water and the fish I am around will bite whatever I can get to them. I am picking between 10 rods and fishing what looks the best based on the shoreline. Ive never been here before, but I am noticing that these Eufaula bass will pull up and spawn on anything – no nothing, mud banks.”

The plan for the final day is more of the same. Fernandas will fish some productive pockets and keep exploring. He has been targeting main lake pockets, river pockets, and basically anything they will spawn in.

Landon Tucker brought 16-pounds, 11-ounces to the scales and heads into the final day in 7th place. The Adel, Georgia pro has been fishing off shore all week and got on the right stretch at the right time after a slow start.

Not only was the first bite a relief, but the 6-pound, 2-ounce lunker anchored his day 2 haul. On pile number 17 for the day, a 4-pounder bit and gave him 2 fish for over 10-pounds. Those two fish stayed with Tucker for a short while before starting back over on his best stretch.

“I caught 2 small fish on a brush pile I marked in practice but I had not fished it yet during the tournament. I got back to my best stretch and ended up culling one of those small fish. I only got 6 bites all day but they are the right fish.”

Tucker has spent his entire event in 8 to 12-foot and is switching between a CJ Jigs ½-ounce football jig and a big worm. His plan for the final day is more of the same, keep his best stretch honest and fish as much brush piles as possible.

The rest of the best: