Carson Cruises to Day One Lead

Keith Carson of Debary Florida leads after Day One with 25 pounds and a 6-13 Lunker. 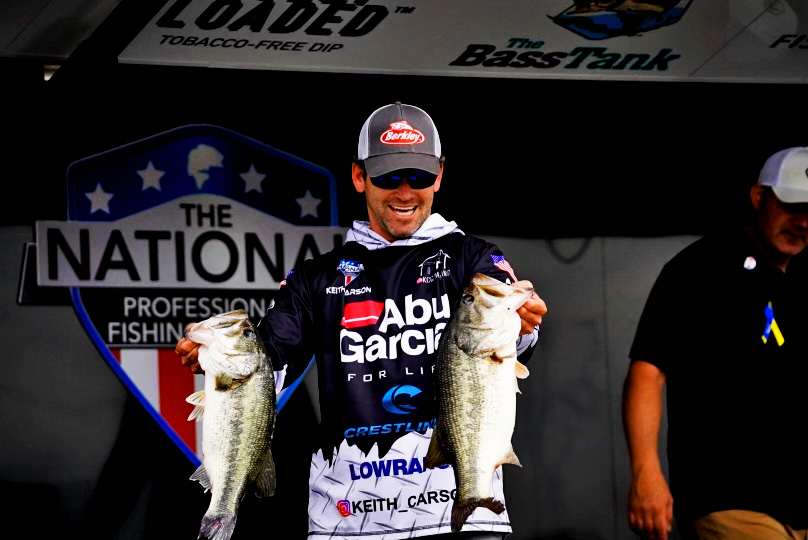 DAY ONE OFFICIAL LEADERBOARD
Did day one go exactly as planned for Debary, Florida pro Keith Carson? Not exactly, but it didn’t take long to get back on track as Carson cruised to the day one lead on Texarkana’s Wright Patman Lake with 25-pounds even. Carson caught the day’s biggest bass weighing in at 6-pounds, 13-ounces.

“I got to my first spot this morning and I wasn’t feeling it. The water had dropped since the final day of practice on Tuesday and the bank brush stuff is getting so shallow you can’t flip up to it much. I scrapped my whole practice and ran all new stuff today.”

Carson was seen flipping on Live Coverage late in the morning after most of his work had already been done. Flipping a Berkley Pit Boss in “darker colors” with a ½-ounce weight was key and he was targeting areas where the fish had nowhere to go to with the falling water.

“I am just flipping and moving fast. The fish are spawning and I am working the bait through the cover and into the fish. With the number of snakes and crappies in this place, the fish are aggressive and if you can hit them, they knock slack in the line.”

A 25-pound bag gives Carson a good start to this event but the 30-pound bag he talked about on Live Coverage was oh so close to becoming a reality.

“I lost a 10-pounder and a 6-pounder. I flipped in and the water was super shallow. I watched that big fish eat it and turned her on the hook set. She just didn’t have it good. I also felt some fish that bit and never got it either – I might be able to catch those tomorrow.”

With weather moving in overnight, nobody knows how tomorrow will play out and Carson is looking forward to fishing new water when he gets the chance to go.

“I may go through some of the stuff I found in practice, but I might just run new stuff and look for fresh fish. Guys were in my areas at the end of the day so that’s another big reason I am going to keep moving.”

In 2nd place on Wright Patman, Nick Prvonozac is looking to make it back-to-back top 5 fishes in the NPFL season. Fresh off a 4th place at Eufaula, the Warren, Ohio pro got to work early this morning and kept it going on his way to a 23-pound limit.

“I caught them pretty good this morning and then went to my second spot and caught another limit. I ran around some more and caught a few more at my other spot.”

Prvonozac, like everyone else, is keying in on specific types of shoreline and bushes and is probing the shallow cover with Yum plastics.

“I may have burned my starting spot because I went back through there and didn’t get bit. I have a bunch of stuff left to fish as I only hit 3 spots today.”

With a limit of 22-pounds even, River Lee ended the day in 3rd place on Wright Patman. Riding a slow and steady flipping bite, Lee was able to cull his way to the top 5 despite not capitalizing on some big bites first thing this morning.

“I lost two nice fish that would have given me at or close to 20-pounds earlier this morning but I made a move and caught two others that culled me up to 20 to 21-pounds.

Flipping a Strike King Rage Bug in the bushes, rotating between black/blue and junebug, the Nacogdoches, Texas pro was able to overcome missed opportunities and get back on track later in the day.

“Tomorrow is anyone’s guess with the weather but I will probably run some of the same stuff I fished today and I have several areas I didn’t hit today.”

With 21-pounds, 13-ounces, Marc Schilling is looking for his second straight top ten to begin the NPFL Season. The Richardson, Texas pro worked a combination of flipping and moving baits to catch his fish today and a few missed opportunities gives Schilling plenty of optimism for the rest of the event.

Schilling struggled for the first couple hours but went to work during a two-hour window and put his weight together in a short period of time. Keying in on specific brush, Schilling opted not to give up information on specifics but is looking forward to the rest of the week.

“I am blessed to have what I had, but I am going for 30-pounds tomorrow.”

Rounding out the top 5 on Wright Patman, Josh Ray brought a day one weight of 21-pounds, 10-ounces to the scale to end the day in 5th place. The Alexander, Arkansas pro flipped bushes and keyed in on a specific type of bush to catch his weight.

“I was just flipping, nothing special. I found something different and was keyed in on a precise bush.”

Relying on a Big Bite Baits Yo Mama creature bait, Ray worked a small stretch of bank to catch his weight. Having just one bass at 11:30 AM, he relied on that small area to get up over 20-pounds on the day.

“With 20 minutes left, I made a little move to another area and culled up to my bag for today. I have a few more places saved for the rest of the week.”

Be sure to join us tomorrow for Day Two with LIVE Coverage starting at 8am CST.