Boomer Bashes them on the Harris Chain

20-10 takes the lead after day one but we're just getting started. 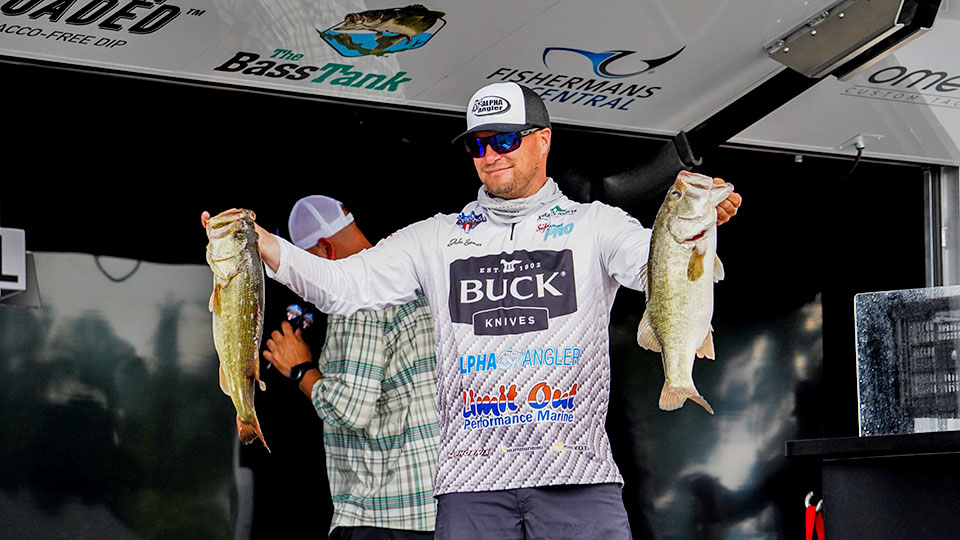 Jake Boomer brought the heaviest bag of bass to the scales at the Harris Chain to grab the day one lead. With 20-pounds, 10-ounces, Boomer leads a field which saw three 20+ pound bags and several big bass weighed-in.

Respectively, the Spokane Valley, WA pro wanted to keep his program on the downlow at least for now. Boomer noted he knew the potential was there but didn’t really know what he had until he got to his spot this morning.

“I had about 10 bites total today and it was a big-time grind. Basically, my day boils down to the fact I made 3 good decisions and caught some key fish.”

Boomer is confident going into day two but knows anything can happen, especially with a live camera tomorrow.

“I didn’t know the quality in my areas really and I just rotated between a chatterbait and a worm and fished a little of everything today.”

John Cox may not have known exactly what his areas would produce going into the day, but the Carrollton, Georgia pro got off to a good start bringing 20-pounds, 9-ounce to the scales to finish the day in the 2nd place spot.

“I didn’t know exactly what to expect this morning other than I had a good possibility of catching some fish. I got a lot of bites in practice this week but I shook them off and had my hook covered so I didn’t get a good look at them.”

Cox wanted to keep the key details about his pattern quiet until later in the week, but noted he was fishing some changes in the grass and had a few stretches of Kissimmee grass with less than 2-foot of water on them where he caught a lot of his fish.

“Once I figured out what was going on, in practice I ran around everywhere looking for the same type of stuff. I hope I can duplicate tomorrow but I am mixing between a flipping bite and a reaction bite.”

With a 6-pound, 9-ounce bass to anchor his day, Bobby Lanham caught five fish for 20-pounds, 7-ounces to finish the day in 3rd place. Lanham caught some quality fish in practice and was keying in on a mix of shallow grass.

“I was fishing shallow and was keying in on isolated shallow grass. I had some idea I was going to catch them today because I had some good bites doing this same thing in practice.”

With stable weather conditions throughout the week, The Cave Creek, Arizona pro found fish grouped up and marked a lot more similar stuff like it. Looking ahead, Lanham is confident in his program and thinks he can duplicate tomorrow.

“I marked 20 waypoints in practice and only used two of them today. I caught most of my weight off the first spot this morning and ended up catching a big one and culled twice on the other spot. I am doing a mix of things and am putting my St. Croix rods to work with a flipping bait and a spinnerbait. My smallest was about 3.5-pounds and I culled probably 4 to 5 times all day.”

In 4th place, River Lee went to work early in the day to bring 19-pounds, 12-ounces to the scales. Fishing comfortably doing what he likes, Lee stuck with his shallow game plan and rode it all day to finish the day in the top five.

“I had one thing, and I just stuck with it. I was flipping the Kissimmee grass just trying to catch 13 to 15-pounds and survive this event. I wanted to fish offshore but knew I had to do this to get a solid bag.”

Always learning on the water, the Nacogdoches, Texas pro got onto a bite first thing this morning he believes will help him keep the momentum going for the next two days.

“I learned my flipping bite doesn’t really get good until around 9AM, but I figured out how to catch them around the same stuff before then. When I do get to flipping, I am just covering water and flipping a pretty heavy weight.”

In the 5th spot, Dale Prinkey relied on his electronics to bring in 19-pounds, 7-ounces of Harris Chain bass to the scales on day one. The Warren, Ohio pro was happy to find some of the areas from practice still had fish.

“I just went and fished a place from practice this morning and got to catching them. I was rotating between flipping and power fishing techniques and mainly shallow.”

Prinkey, like the others, had some keys to his success and noted he got dialed in on something a little different than some of the other guys.

“I was fishing shallow and around that Kissimmee grass but I was looking for depth changes. I caught two good fish in practice doing it and then just spent a lot of time idling to find more stuff like it.”

Best of the Rest: