Day one is on. Get ready for 21 hours of tournament coverage. 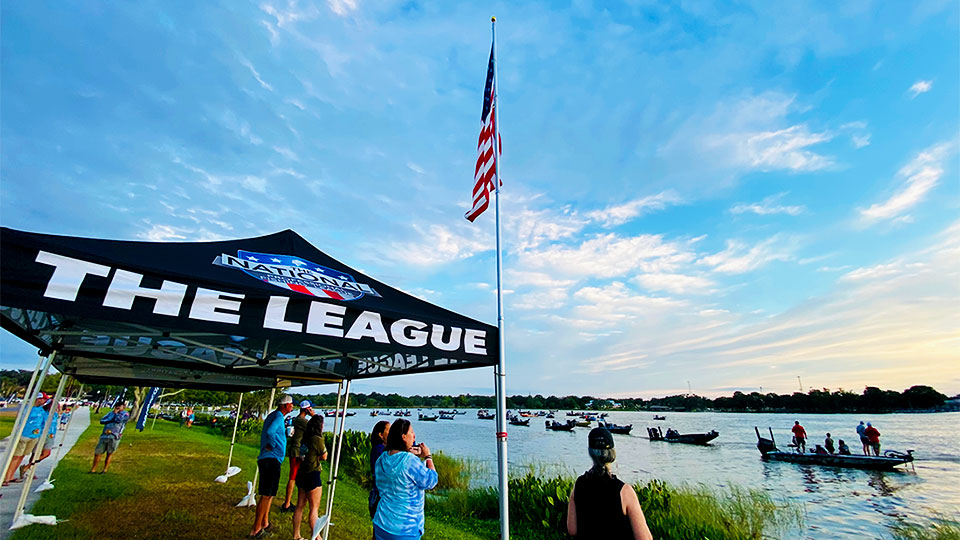 Anglers launched this morning into partly cloudy skies and light winds on the Harris Chain as day one begins. With a chance of thunderstorms in the afternoon, anglers will be dealing with 90-degree weather as they search the chain of lakes for the biggest 5 bass limit on day one of competition.

For Keith Carson, having an event in his home state where he has so much success is “always awesome” and the weather before this event has tossed the anglers this week a bit of a curve ball, but it might help spread the field out.

Carson believes the fishing being “somewhat” spread out this week will move some guys around shallow and even plans to fish shallow a lot himself. It’s not that the hydrilla game isn’t playing, it’s that the fish are just not 100% off shore yet. A lot could have changed with stable weather during the 3 official practice days, but look for a few local anglers to make a splash early on live.

“My goal is to get 15-pounds a day and I’ll be very happy. 45-pounds won’t win, but it will be a strong finish this week. Medium size fish will be key and if you are lucky enough to get a big bite, it goes a long way.”

Robert Terkla also has some time under his belt this year on the Harris Chain and like Carson, Terkla believes there will be some mix of shallow and offshore. Anglers that choose to fish the chains inconsistent hydrilla will have to deal with pressure from other anglers.

“With some of the offshore fish grouped up, guys will find the same things and need to learn to fish around other competitors.”

What will it take?

Landon Tucker believes 13-pounds a day will get a check and it will take upwards of 65-pounds to win.

Matt Looney who is sidelined this week due to a surgery wishes he could be fishing but based on his experience, believes 42-pounds will cut a check, with 70-pounds winning.

Cody Ryan Greaney is a self-proclaimed “horrible guesser” but believes 33-pounds will get a check and 58-pounds will win.

Lake Eufaula Champion John Soukup believes 39-pounds will get into check range and it will take a 22-pound average to win this week.

LunkersTV, Rob Terkla believes “12-pounds a day, 13-pounds being more of a guarantee will cut a check. I think around 62-pounds will win.”

Daid Gaston is sticking with what he has seen for years. “12-pounds a day always gets paid every time I have been here.”

With anglers underway at 7AM, live coverage picks up at 8AM with host Luke Dunkin and special guest Pro Angler Bradley Hallman.