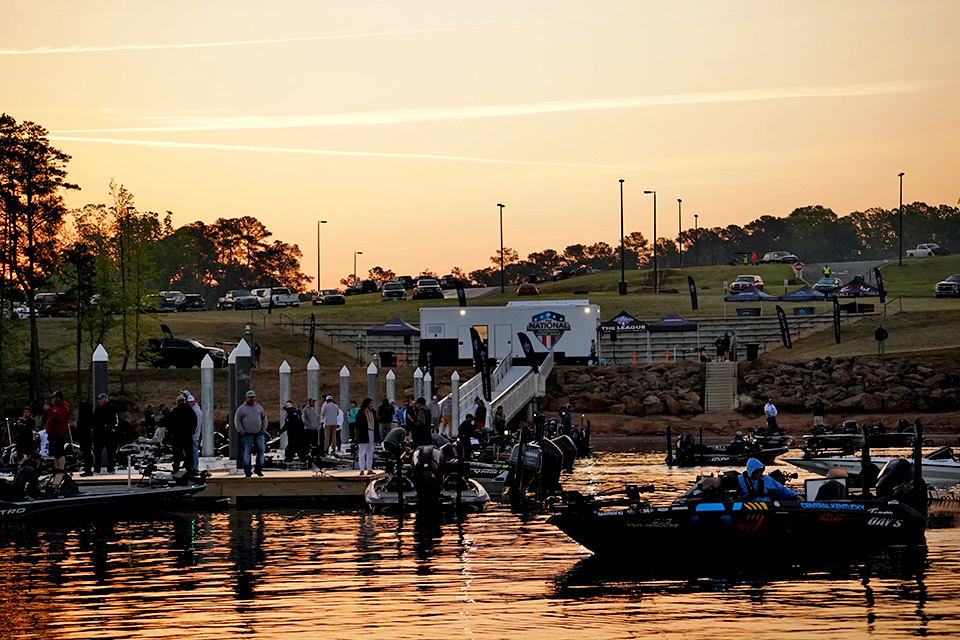 ANDERSON, South Carolina – After a day off on Wednesday, its apparent most anglers were dealing with changing conditions for day one of competition. With warming temperatures, the fish are on the move, and it took some time for some guys to settle in on Thursday. Co leader Buck Mallory got off to a slow start quality wise but made the right adjustments to finish his day with two large culls later in the day t catch his day one weight.

Brandon Perkins in tied with Mallory for the lead, and Perkins was one of the few to catch quality bass throughout the day. The 2021 Pickwick Champion was able to catch around 15 pounds by only his 3rd stop of the morning and spent his day looking for bigger bites, capitalizing on two culls and nearly missing on a homerun 6 pound largemouth shortly after.

Read more about the top 5 anglers and check out the day one results on the Leaderboard.

Anglers may have taken some time to find their groove on day one, but the weights are certainly stacked at the top. Hartwell is changing daily and with anglers fishing all three days, it is anyone’s game going into day two. Only one pound separates Mallory/Perkins from the 6th place spot Kevin Rogers and Bryant Smith who sits in 18th with 15-pounds 5-ounces remains only 2.5-pounds back.

Some keys to look for on Live Coverage with Fat Cat Newton and Luke Dunkin are which anglers keep changing with the conditions. Anglers starting on the shad spawn bite have a good chance to catch a decent limit early with the rest of the day to upgrade. Anglers focusing on the sight bite could be disappointed as spawning fish could be moving off their spawning beds quickly.

Angler Jesse Millsaps, who sits in 19th place currently, warned sight fisherman in the Lake Hartwell Preview that during this time of year, with bass being so focused on the herring, spawning fish are unreliable and will frequently drop their eggs and vanish. Finding fresh fish will be key to staying ahead of the spawning bite.

Follow along with the unofficial Weigh Live Tracker, LIVE Blogs, and daily on the water photo galleries of the anglers on Lake Hartwell.

LIVE Coverage is available on Friday and Saturday starting @ 8 AM.

Under the Go Live Tab, choose the LIVE Leaderboard to see estimated weights entered by the anglers throughout each day of competition. Watch the Live Weigh In from Lake Hartwell all three days!