Johnson Leads The Pack After Day One ON Kissimmee

Bringing 26.3 to the stage, Ron Johnson sets the pace on Kissimmee. 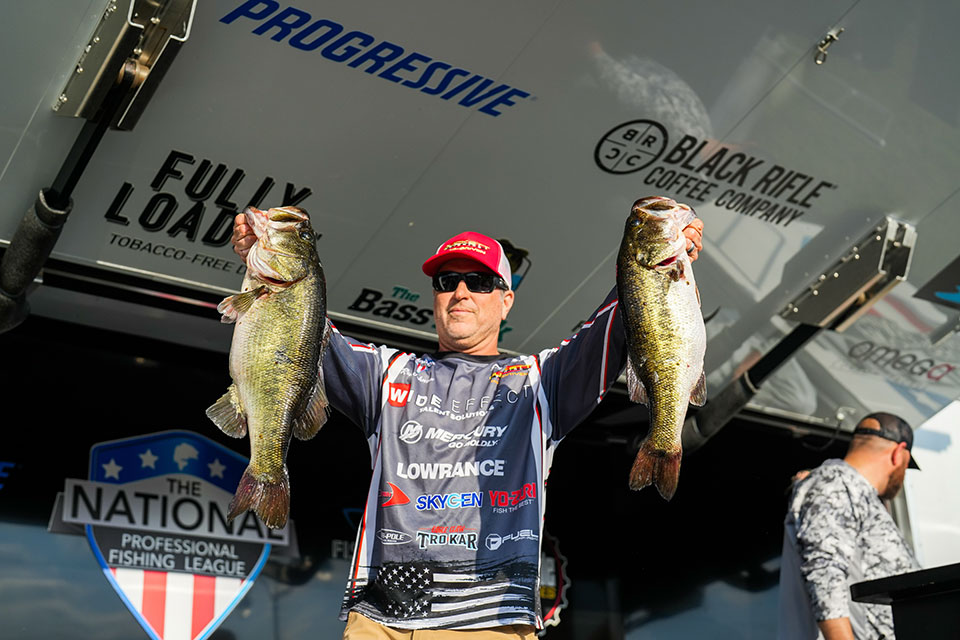 Leading the pack after day one on the Kissimmee Chain of Lakes, Ron Johnson worked through several different areas today to catch his bass. With a 7-pound, 12-ounce kicker to anchor his weight, Johnson brough a limit worth 26-pound 3-ounces to the scales giving him a 2-pound, 7-ounce lead going into the second day.

After arriving to his starting spot to find another angler fishing, the two were able to work together catching solid limits before moving on. Johnson caught three of his bigger bites after leaving and is using his Lowrance Active Target to find fish and line up his casts.

“In practice we didn’t have much wind, but today it blew and the fish were pickier. I caught 95% on one bait and could see them on forward facing sonar sitting in the grass. Going into day two, I have quite a few places that have been hit or miss, as well as a few other key spots I can get some bigger bites like I did today.”

Johnson believes his stuff has a chance to hold up for a couple more days and is excited to get out there tomorrow.

Taylor Watkins
With 23-pounds, 12-ounces, Tennessee pro Taylor Watkins worked a couple different spots to finish the day in the second-place spot. Watkins got off to a hot start first thing in the morning putting a solid limit in his livewell before making two crucial culls later in the day.

“I spent some time graphing and flipping in practice and I ran by this area and something told me I had to check it out. I started working through, spooked a big fish and caught a couple others. I moved a bit further and found the motherload.”

Sharing his starting spot with another angler in the top five, he is unsure if the area will hold up for three days but catching a few later in the day gave him confidence he could have a productive day two.

“It’s the winning spot – the question is if it will hold up with two of us fishing it. I got some good fish and lost some first thing so I am confident we can catch some tomorrow and then hopefully I can make a few culls on my secondary spot again.”

Patrick Walters
Ending the day in the third-place spot, Patrick Walters covered a lot of water to catch his day one bag of 21-pounds. Walters sampled a bunch of water in practice and made sure he was in his key areas at the key times to capitalize on biting fish.

“I spent a lot of time in practice just looking at different lakes and tried different depths and cover. Although I didn’t get many good bites, I did catch a lot of fish and figured out some places and the timing. Today, I hunkered down in those areas and just weeded through fish to see what was truly there.”

After catching his bag, Walters graphed and located some other areas that may help out as the tournament goes on.

“I wouldn’t mind it cooling down a little bit but we got two more days of work to do out there.”

Michael Catt
With 20-pounds, 15-ounces on day one including a 6-pound, 5-ounce kicker, Michael Catt finished the day in the fourth-place spot, tied with Trent Palmer.

Trent Palmer
Trent Palmer spent a part of the day with four quality bass in his livewell before finishing up a 20-pound, 15-ounce limit putting him in the fifth-place spot. After a productive practice period, Palmer fished three types of patterns on day one to catch his bag.

“I was able to locate a few different ways to get some bites, and this morning I started on a bar and was able to catch a good fish early. I had opportunities for a better day but lost a few fish on treble style baits while ‘junk fishing’ through some key areas from practice.”

Jake Boomer
After abandoning his areas from practice, Jake boomer caught fish on a bunch of different baits to put together his 20-pound, 12-ounce limit on day, finishing in the sixth-place spot. Making a run that included locking, Boomer fished his way back towards the takeoff running into some biting bass along the way.

“I have had good practice days all year long and this week I only had one decent day. I was confident with abandoning that and just going fishing today. I fished through several areas and ran into them.”

Boomer had an early flight and caught fish on every bait in the boat once he located the school he was looking for. Flipping a big weight with a Jaboom Baits Beaver Balls, he was able to scale down his weight as the bait is designed to slip through thick cover.

“This bait allows me to fish behind guys and the big one I caught today ate at before it fell a few inches. It’s a pure a reaction bite and they absolutely crush it. I caught some key fish flipping but caught fish on every rod I had rigged up. It took some time to figure out what was going on in my area but once I started catching a few, it all made sense.”

JOIN US LIVE – we go live tomorrow morning at 8:00 ET on Kissimmee with Luke Duncan and Fat Cat in the studio with James “Worldwide” Watson on the water. See you for day two!