Soukup Smashes them at Eufaula

Day one is a wrap. But we're just getting started. 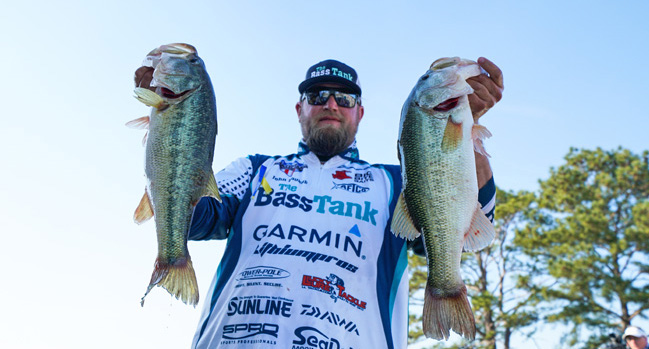 EUFAULA, Alabama – For the inaugural event of the 2021 NPFL season, John Soukup of Sapulpa OK takes the Day 1 lead with 20 pounds, 12 ounces.

Soukup began his morning fishing shallow, offshore on Lake Eufaula in a small area he found with several brush piles close by.

“I found this little main lake pocket that had 10-20 brush piles I could easily jump around between. I slowly plucked a fish here and there and culled up to a 10 to 11-pound limit.”

A good decision between 10 and 11 AM defined his day when he decided to make a little move to a shallow pocket. After scanning around on his Garmin Livescope, Soukup realized the area had loaded up with fish.

“I could see fish everywhere but they would not bite. I rotated though all the rods I had and finally got a 5-pounder to bite on a shaky head. I stuck with that but couldn’t get anything to go.”

Another short move further back out of the pocket to the main lake paid off as Soukup was able to find a wad of big fish on his Livescope and quickly went to work with a jerkbait.

“I could see every fish and I didn’t even make a cast until I saw them on the Livescope. Everybody could probably see me on the Live Coverage scanning around looking for fish.”

Rotating between a Spro and a Megabass, he was able to jerkbait his way to a few solid culls late in the day to put him 3-pounds, 12 ounces over the 2nd place angler.

“Both of the big fish I caught had others with them, little wolfpacks. I would get one to bite but the others would swim away.”

Soukup believes he should have no problems catching fish tomorrow between his shallow brush and his “medium” transition areas, but whether or not the big fish will bite remains to be seen. The game plan is to continue to run productive areas between 3 and 15-foot and try to find those bigger fish.

In second place, the pro from Warren, Ohio got to work early and often. Joe Discerni started on his offshore spot first thing and they were biting to the tune of 17-pounds.

“I caught all my weight really fast and within two hours the bite had died, but I had my weight. I moved up shallow to check on some bed fish and found some little ones and ended up losing a 3.5-pounder flipping that would have helped.”

As for tomorrow, Discerni is confident he can catch some more fish, but it’s anyone’s guess if the big fish show up again. He visited the “sweet” spot later on in the day and was able to grind out a few fish on the crankbait in the afternoon but no fish that would have helped.

“I think I can get a few on that 10-12-foot diving crankbait again and I might be able to slow down and pick up a few more on some bottom baits.”

Nick Prvonozac of Warren, Ohio ended the day in 3rd place with a 16-pound, 10-ounce limit. Prvonozac made the run to the south end of the lake to target spawning fish but was met with a plethora of small fish and nothing new that had moved up.

“I caught a few of those smaller spawning fish but had to get off the bank to look for bigger bass. I fished new water today in 4 to 6-foot and just covered water.”

The Fishermans Central pro mixed it up between a reaction style bait and a bottom contact bait but with only catching 5 all day, it was a grind. What he expected to be a sight fishing derby from the beginning, turned into a scramble to keep his bait in areas where the fish will be transitioning through.

“I only got 5 bites all day so it was not fast and furious, but they were the right size. As for tomorrow, I will probably catch a quick bedded fish and then do more of the same. The water is dropping and muddy, the fish are all messed up.”

Only 4 ounces back of Prvonozac, Greg Mansfield of Louisburg, Kansas took advantage of an early “whack fest” and caught his 16-pounds, 6-ounces to end the day in 4th place. Mansfield took advantage of a spot he found in practice and was pleasantly surprised to find numbers of fish.

“I had one bite in practice on this little deal and I rolled up this morning and it was on. I grinded for a few hours but the bite died and nothing else I caught after helped my bag.”

Mansfield found some quality Eufaula bass but noted they were all clones – 3 to 4-pounds.

“If I can get one or two big fish tomorrow and finish a limit, it could get interesting. I found some sight fish and I could catch a few if I need to, but I’d like to save those. Ill bounce back and forth shallow and deep and see what happens.”

In 5th place after Day 1, Chance Woodard brought 15-pounds, 8-ounces to the scales. The Big Bass leader for the event is John Cox with a 6-pound, 1-ounce bass.

Rest of the Best: 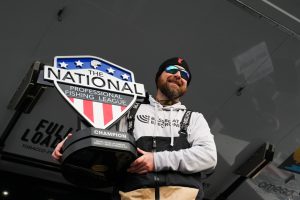