Holding off the weather and the rest of the field, Keith Carson continues to lead. 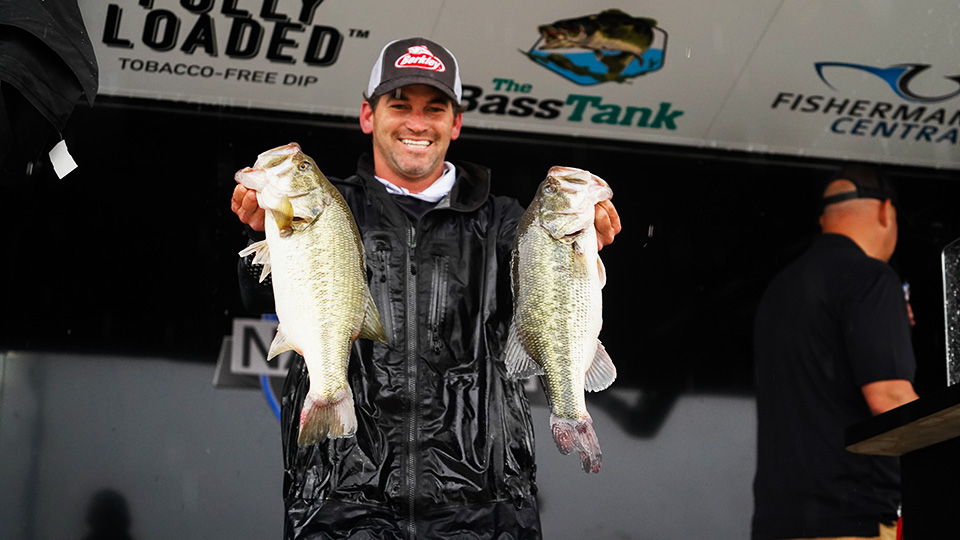 A shallow water expert, Carson had no words as he held up his two biggest bass during the rainy weigh-in.

“I am not even sure what to say, it was an amazing day. My primary areas had a ton of boats on them, I don’t know if word got out, but I just ran all new water. I fished a ton of spots, fished on instincts, and it just worked out.”

Carson abandoned his practice areas early into the day on day one and has completely changed his approach. Hardly unable to describe his decisions, the Debary, Florida pro has been giving viewers on Live Coverage a firsthand look to his master plan, and is running purely on instincts.

“I am targeting bushes and I am looking for small pockets. In every pocket, there is one bush that will produce a bite. I have no idea which one it will be until I get there and get to look around.”

Extremely key subtleties are what is separating Carson from the pack, and picking up on minor details he uses in Florida could be the answer we have all been looking for.

“The bushes are all different. Some have moss on them. Some of the bushes are big and I know there is a big root system. This lake fluctuates so much that a lot of the year, all the bushes are out of the water. The root balls get the clay washed away when it rains hard so those areas are 6” deeper than everything else. When I am fishing 1-foot of water, those bushes have deeper water under them and the bass are up there.”

Carson has a stellar morning catching all of his weight early but has been struggling to get bit later in the day. The last 3 hours have been tough but it’s not been for a lack of effort.

“I don’t know what it is, but I have been running all over and I even got under that little bridge today. Tomorrow is going to be tough and the water will be muddier than we have seen. With that said, I’ll decide what I am going to do when I get there and I’ll keep going on instincts.

Although Wright Patman has seen more pressure than it ever has before, the lake is showing out. 7 limits of more than 20-pounds today made the weights tight, but Carson is carrying a 5-pound, 3-ounce lead into the final day.

“I had a 7-pounder follow it to the boat and just sharked it down, it didn’t open its mouth. I’ll probably go and try to catch that tomorrow. I am going to run all new water tomorrow and try to catch 20-pounds.”

In 2nd place going into the final day, Jesse Millsaps brought 23-pounds, 4-ounces to the scale to give him 42-pounds, 1-ounce total.

Millsaps is riding a reaction bite this week to catch his bass and got to work early again on day two.

“I started out my day and got two big ones early on my Abu Garcia rods fishing moving baits. I have been running some of the places I fished in practice but have been running new water every day to find fresh fish.”

The Jasper, Georgia pro wanted to keep his bait a secret until tomorrow, but said what he is doing is different than most. A late bite while running new water this afternoon culled him to his days weight and Millsaps believes the falling water is actually helping his bite.

“I had my 20-pound bag this afternoon and I was actually trying to lay off them. I made a move and caught that 4-10 to get up there. I am looking for fresh fish and the falling water is helping position the fish where I can get to them easier.”

Nick Prvonozac added 19-pounds to his 23-pounds on day one for a two-day total of 42-pounds. The Warren, Ohio pro sits in 3rd place going into the final day on Wright Patman.

“I caught them steady again all day today and stopped culling around 1. I kept getting bites but they were all the same size fish and I never culled again. I was fishing the same stuff, within the same area and tomorrow I’ll run some new water but all in the same area. I am fishing everything but definitely keyed inro a certain type of cover.

Josh Ray settled in on day two after a few early bites and flipped his way to the tune of 19-pounds, 2-ounces. A two-day total of 40-pounds, 12-ounces has the Alexander, Arkansas pro sitting in the 4th spot heading into Showdown Saturday.

“I got a few fish early and got a few culls late. I am fishing the same baits as yesterday, and I fished one stretch from yesterday. I got in there and spent more time in there today to pick it apart. I had 17-pounds on the unofficial board and made one last cull within last 10 minutes that I didn’t enter. I am still just pitching that Big Bite Baits Yo Mama around and I am not sure about tomorrow just yet.

With a day two weight of 22-pounds, 13-ounces, David Gaston finished the day in the 5th spot with a two-day total of 39-pounds, 11-ounces.

Gaston went back to the same areas he has been fishing and noted the only difference was he just got the right bites. Fishing a combination of moving baits and flipping, the Sylacauga, Alabama pro rode a steady bite all day to land in the top 5 going into showdown Saturday.

“I just ran across them today verses yesterday, and the falling water got them positioned good for me.”

After catching a few early on a squarebill crankbait, Gaston “got sick of throwing it,” and made the switch to his flipping bite. A 5-pound bite soon after clued him in to make a change which was key to get his event back on track.”

“I noticed something weird when that big one bite. I got her in the boat and started throwing a lighter weight on the Texas rig and got to catching them really good after that – the weight change was key. And, I want to thank my lovely wife.”