Day One Begins on Kissimmee Chain

We're off and running for the final stop of the 2022 NPFL Season on the Kissimmee Chain of Lakes. Join us for all the action. 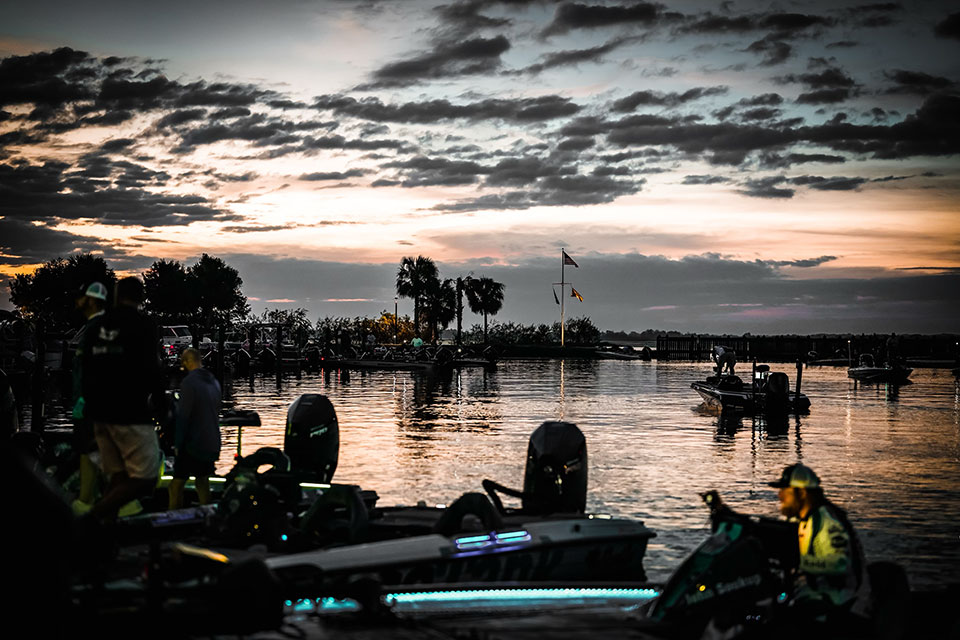 Kissimmee, FL – As anglers launch on the first morning at the final NPFL stop of 2022 season, the Progressive Angler of the Year race is coming together and looks like a two-man race to be decided at the Kissimmee Chain. The weather looks to be consistently in the 80’s this week with partly cloudy skies, and the water is more stable than it was during pre-practice. With Hurricane Ian having brought loads of water to the system, the fish have experienced flow like no other.

Local anglers like Keith Carson and Sam Whitmer had not previously experienced anything like it and noted it was tough during pre-practice to get any idea of how the event would shape up. Both anglers have years of experience and waited until official practice to determine any sort of patterns. Carson and Whitmer both reported less than satisfactory practices, but expect the locals to gain confidence as the event goes on.

With water flowing through the system, and higher levels than normal, the clean water which was once a key factor in finding fish and getting bites, is everywhere. The excess water flushed the system and brought cleaner water to more chain, therefore spreading the fish out. Expect anglers to flip and pitch in shallow vegetation as well as some anglers working offshore vegetation. It’s likely an angler fishing a combination of both the bank and offshore will rise to the top of the leaderboard.

The angler of year race, sponsored by Progressive, is coming down to the wire with smallmouth expert Gary Adkins leading the charge. Adkins holds a 14-point cushion coming into Kissimmee over Timmy Reams who led for most of the season. Adkins posted a win and a 2nd place in the last two events to flip the script on Reams who has remained super consistent this season. Two-time NPFL champion Taylor Watkins sits in third place with a 43-point deficit of Adkins. Behind him, rookie Logan Millsaps and two-time champion John Soukup are 49 and 51-points back, respectively.

Here is what the anglers had to say about the event after three days of practice.

Gary Adkins: “I have had two good days of practice and one bad – I think I have a good game plan but the fish are moving and I will need to move along with them. My guess on winning weight will be 18-pounds a day average, and around 56-pounds total.”

Timmy Reams: “Practice was good – I am excited to get it started. I will be mixing in a couple different patterns tomorrow and I am guessing around 57 to 60-pounds.”

Taylor Watkins: “Practice was not bad, but not great. I have three areas and if they are there, then good, and if not then I am not sure. It is hard to run around and get bites – the bass are definitely not everywhere.”

Bryant Smith: “Practice was random for me and I will just have to try and stick around some areas I got some bites and just go fishing. My guess on winning weight would be 62-pounds total.”

Keith Carson: “Practice was pretty lousy for me and I will probably be fishing shallow doing some flipping. The key will be getting a big bite every day.”

Sam Whitmer: I am guessing less than I said before – 17.5-pounds a day average to win, and 12-pounds to get a check. It was a tough practice but I didn’t have any hooks so I am not sure exactly how big the ones that bit were.”

Tune in daily November 3rd through 5th to thenationalprofessionalfishingleague.com to watch daily action from Kissimmee, Florida, with Live Coverage beginning on Friday.

Follow along and watch the daily LIVE Leaderboard, LIVE Blog, and on the water photo galleries and blogs of the anglers on the Kissimmee Chain!

Check out the Progressive Angler of the Year standings, here!