Day One Begins on Sandusky Bay

Stop #5 presented by Fishermans Central is off and running with the NPFL Pros taking on the Great Lake. 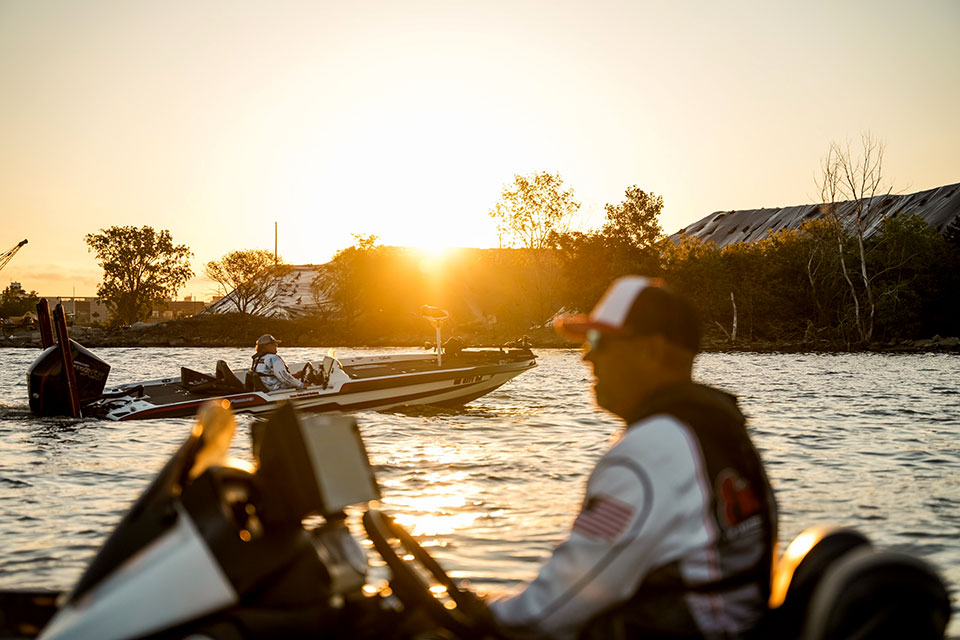 Sandusky, OH – Anglers launch on day one into mostly cloudy skies expected to give way to a sunny afternoon. The highs will be around 80-degrees with light and variable winds throughout the day. With Sandusky Bay exposed to the wind, as seen in practice, the anglers chasing smallmouth will be dealing with extended run times to reach their fishing holes. Some anglers could run as far as Lake St. Clair in Detroit if conditions allow.

Like other stops along the 2022 NPFL trail, anglers once again can choose to target both smallmouth and largemouth bass, but unlike Saginaw Bay, this go around will be dominated by smallmouth. With a healthy, but lighter, population of largemouth, some could choose to save the gas, extend their fishing time by staying close and leave Lake Erie with a paycheck by fishing for strictly for largemouth; but they likely won’t have the opportunity to make a run at victory.

The angler of year race, sponsored by Progressive, is shaping up to be a good one with two more events remaining. A lot will be determined this week in the North before the NPFL trail heads to Florida to finish the season. Timmy Reams has been consistent all season long and leads the pack with 954 points. Right behind him, Saginaw Bay Champion Gary Adkins with 943 points has to like his chances this week on another smallmouth body of water. First year NPFL pro Logan Millsaps sits in third, two-time NPFL Champion John Soukup sits in 4th and Eddie Carper rounds out the top five.

Here is what the anglers had to say about the event after three days of practice.

Gary Adkins: “I think 21-pounds a day will win and 14-pounds gets a check. My practice was hot and cold – one good day and two not so good days, due to high winds.”

John Soukup: “I think it will be all brown fish as the largemouth can’t touch the smallmouth here. It will be between 67 and 69-pounds for the win.”

Sheldon Collings: “Practice was really good the first day and then the wind hurt the last two. And I opted not to break anything so I fished out of it and it wasn’t very productive. I think 14-pounds a day will get you paid but it could be more than that. Definitely not less.”

Timmy Reams: “Practice was rough, man! If you can get 19 to 20-pounds a day I think you will win. It will be about 14-pounds to get a check and it’s been so windy I think the lake will muddy up.”

Logan Millsaps: “My practice is giving me mixed feelings honestly and I have been getting a lot of bites but the ones I am getting have been good ones. I was hoping the weather held off a little more to give us a bit longer to actually practice. For me, and those of us who don’t have a lot of experience here, that extra time would have definitely helped. I think around the 60-pounds mark to win and it will most definitely be big smallmouth. Somewhere between 13 and 14-pounds will get paid.”

Hunter Baughman: “Practice was fair for me but not great – just a little windy (haha). I plan to begin each day on largemouth until I have a limit and then spend the majority of the day on the big water looking for smallmouth. I think 62-pounds wins and 45-pounds will get paid.”

Bryant Smith: “Practice was tough for me with all the wind we had and it was super tough to move around. I am guessing right around 21 to 22-pounds a day could win it while 14-pounds will get a check.”

Louis Fernandes: “My practice was not good. I simply couldn’t move around the lake and be efficient with my days. I think 15-pounds will get a check, and probably 20-pounds will win.”

Ross Rhodes: “Practice at Sandusky was less than beneficially due to high winds and it was really hard to get out there and graph. As long as the weather isn’t too bad tomorrow, I am actually going to make the run to St. Clair, and as long as the run may be, I should get to fish for about 4.5-hours before making the run back. I think about 62-pounds to win total and probably 14 to 15-pounds a day for the check weight.”

Justin Kimmel: “I think 66-pounds wins it; I had one good day of practice but that was not nearly enough time with the winds to get what we needed. I will be practicing during the event and I am going to chase smallmouth mainly but if we get locked in the harbor, I did find some largemouth as a backup.”

Tune in daily September 1st through September 3rd to thenationalprofessionalfishingleague.com to watch daily action from Sandusky, with Live Coverage beginning on Thursday.

Follow along and watch the daily LIVE Leaderboard, LIVE Blog, and on the water photo galleries and blogs of the anglers on Lake Erie!